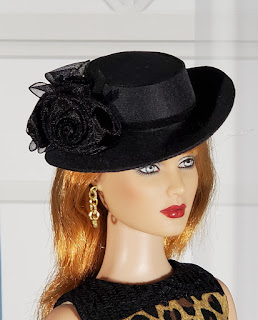 When I used to make miniature hats decades ago, I used an iron on material for shades called Tranlam.  That doesn't seem to exist anymore so I've been using something called Fuse-A-Shade, although I think any nonwoven iron-on interfacing with some body to it from your local fabric store would work.  The only thing I sew is the outside of the brim because two layers of interfacing makes them too stiff to play with.  If you want to stick to a simple pillbox, you won't need a sewing machine at all. 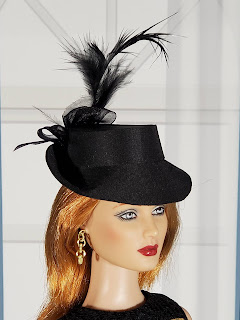 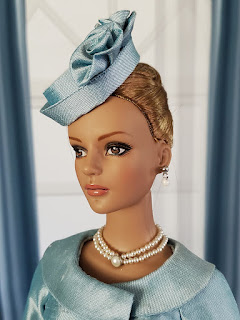 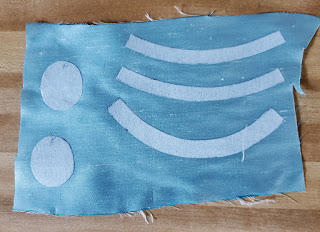 I have traced my pattern pieces onto the interfacing and cut them out.  Iron them to the wrong side of the fabric leaving at least 1/2" between the pieces.  (Pay attention to which side has the glue on it if you don't want to mess up your iron.)  I have two tops, two crowns, and only one brim piece.  The other brim piece will be plain fabric.  Cut around all the pieces 1/4" outside of the interfacing.  Note:  The outside crown piece needs to be about 1/4" longer than the inside piece. 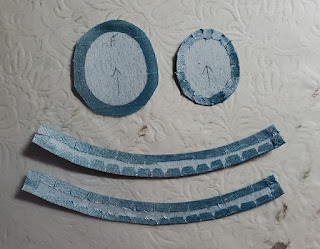 I have notched the seam allowance of one of the hat tops and glued it to the inside.  You really need a tacky glue for this.  I used Aleene's Fast Grab Tacky Glue.  After clipping or notching,  I have glued under three edges of the crown pieces, leaving one short edge unglued. 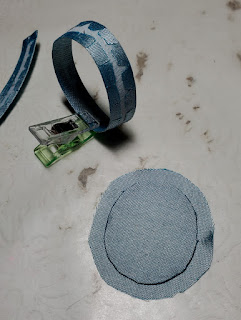 Here I've glued the inside top to the outside top piece.  I've overlapped the finished edge of the inner crown piece over the unfinished end and glued.  Little clips are handy. 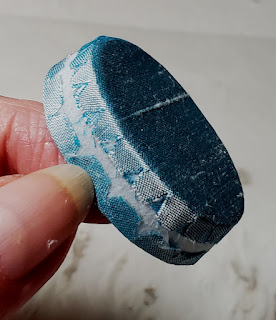 Next I notch the seam allowance of the top not too close to the inside of the top and glue it to the outside of the inner crown.  At this point you could just glue the outer crown piece around the hat and call it a pillbox but if you want a brim, you're going to have to sew two seams.
Wrong sides together sew a lining to the outside edge of the interfaced brim piece.  Notch the edge, turn and press.  Open it out and sew the center back seam.  Press this seam open.  (Sorry I didn't get a picture of that.) 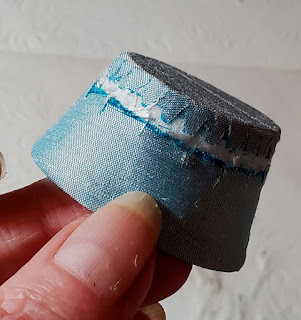 Clip the inner edge and slip it over the crown so that the crown interfacing and brim interfacing are aligned.  I use a toothpick (I would use my glue syringe but I can't find it) and place some dots of glue under the clipped edge of the brim to hold it in place. 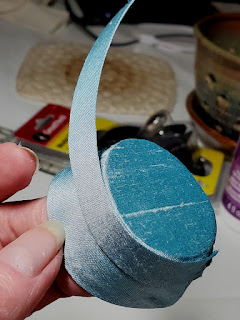 The only thing left to do is glue the outer crown in place overlapping the finished edge over the raw edge and have fun decorating your hat.
Somewhere I saved a PDF of my hat pattern with three different brims but it seems to be hiding on my computer.  In the meantime, Missy's Imaginings has transposed a people pattern into doll sizes that should work for this technique.  You would need to use the pieces labeled for buckram for your interfacing pieces.  I would double check that those pieces fit well together and remember to make your outer crown piece about 1/4" longer.  https://missysimaginingsdotcom.files.wordpress.com/2020/12/hats-for-bjds.pdf
Have a great holiday weekend.
Posted by Nancy at 3:19 PM

Nancy
I started my jewelry making journey in 2006 and continued it until was old enough to get my Social Security. Since then I've been able indulge other interests--painting, knitting, and now fashion dolls.

Promote Your Page Too