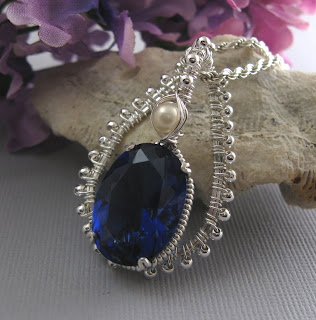 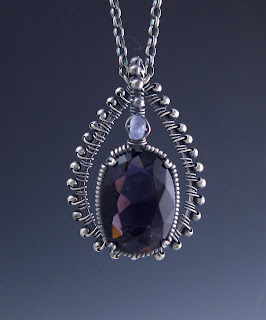 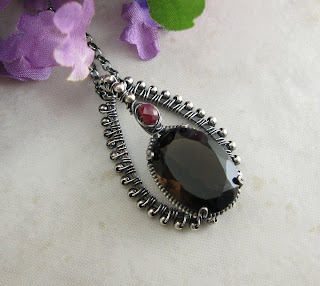 I finally finished a new tutorial. I've figured out that I wait so long between tutorials because MS Word gives me such a headache. This lesson teaches how to make consistently perfect prongs to set an 18x13mm oval faceted stone. You then create a beaded frame around the stone that is not only beautiful but solves the problem of faceted stones rolling from side to side when worn on the neck. Once mastered, the techniques can be used to set any size stone. The bail allows this to worn with even your largest omega chains. The finished size of the pendant is approximately 1 ½” tall by 1” wide. I now have it listed in my Artfire shop.
Posted by Nancy at 11:24 PM 6 comments: 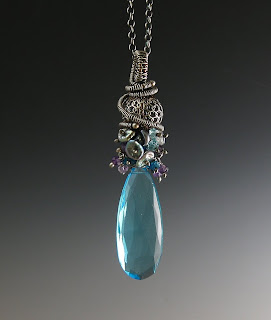 The theme for this week was men's jewelry. But that didn't inspire me this week. Instead I went with a color which, according to Pantone is supposed to be the hot shade for spring 2010. I was happy about that as it already is a favorite color of mine. This necklace uses a large aqua hydro quartz drop topped with two different colors of apatite, purple amethyst, silvery blue keishi pearls, a filigree bead and a hand woven bail. 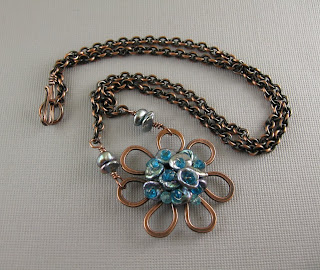 This one is a hand forged and soldered copper flower shape. I filled the center with the same blue keishi pearls and two colors of apatite. Very summery.
Posted by Nancy at 1:05 PM 6 comments: 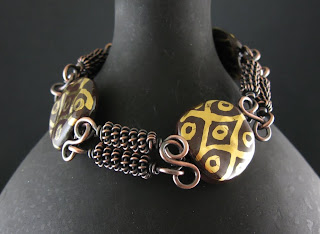 I love using Kazuri beads in my jewelry. Kazuri beads are fair trade beads from Kenya. The factory is on part of the old Karen Blixen coffee plantation (remember the movie Out of Africa) and provides employment opportunities for 350 disadvantaged women who would otherwise be living in extreme poverty. I connected these beads with some coiled copper links to make a chunky and bold bracelet. 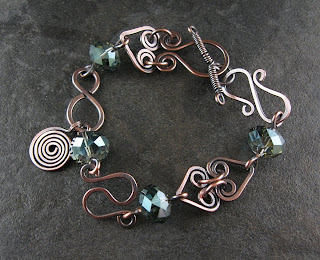 This bracelet was made by raiding my spare parts box. I connected the parts with some beautiful 12mm sea green glass beads to make kind of a fun bracelet.
Posted by Nancy at 10:45 AM 2 comments:

Year of Jewelry 2010 is officially underway. I was bionic Saturday and spent the day making four pairs of earrings while watching a horror movie marathon on the SyFy Channel. But none of these earrings were inspired by the movies fortunately. On the contrary, some of them are downright romantic which is unusual for someone who has been accused of not having a romatic bone in her body. :D 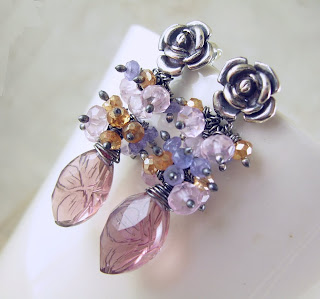 These are tanzanite, pink amethyst, and golden mystic quartz over a rose hydro quartz drop. The silver roses were connectors that I soldered a post to after removing one of the loops. 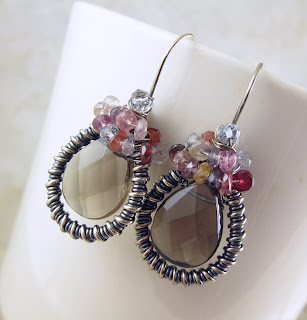 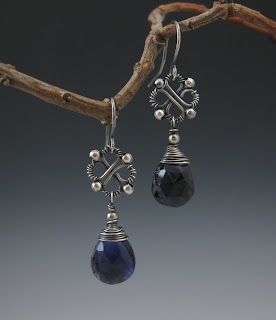 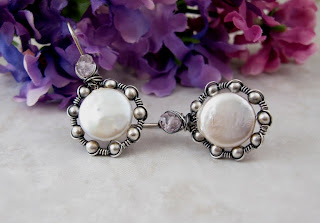 And finally, coin pearls framed with sterling silver and beads with a pink amethyst accent.
Posted by Nancy at 9:00 PM 4 comments:

Nancy
I started my jewelry making journey in 2006 and continued it until was old enough to get my Social Security. Since then I've been able indulge other interests--painting, knitting, and now fashion dolls.

Promote Your Page Too